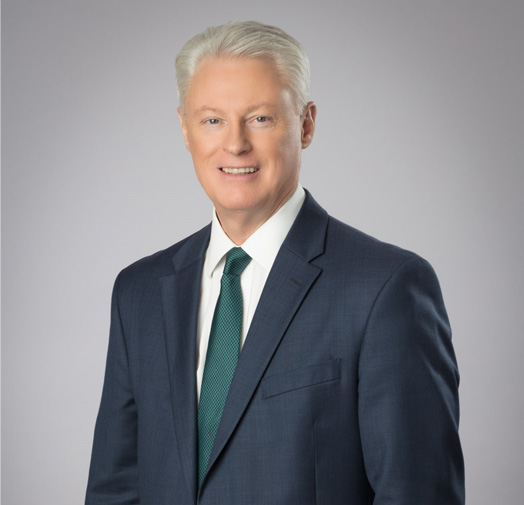 Steven C. Ruth is the managing and senior trial attorney of The Ruth Law Team. With more than 40 years of experience, his legal knowledge is extensive. His professional skill has earned the respect of his colleagues and the appreciation of many clients. Steve has represented thousands of families and been successful in obtaining compensation for their injuries or wrongful death due to the negligent conduct of individuals, corporations, and insurance companies. He conducts jury trials involving auto, truck, and motorcycle accidents, as well as defective products, elderly abuse, and medical malpractice.

He is admitted to practice before the following courts:

Steve maintains a prestigious “AV Preeminent rating” by Martindale-Hubbell, the most prestigious national publication in the legal field. This honor is bestowed upon a comparatively small percentage of lawyers and law firms. It is the top rating available for any lawyer or law firm in the United States. The AV Preeminent rating reflects that an attorney has reached the height of professional excellence and is recognized for the highest levels of skill and integrity, as well as numerous years of experience in the legal field.

Having you as my lawyer was the best legal experience I could have imagined with the end result far better than I had even hoped for. Thank you, Mr Ruth!

Trustworthy, worked fast, handled all of my needs.

Great attorney and Rick is a fantastic paralegal.

[They] were great pulling me out of a bad situation and straightening the mess out. Thank you so much!!

Steve earned his Bachelor of Arts degree in History and Political Science from Dickinson College in Carlisle, Pennsylvania where he was president of Phi Delta Theta. One year of his undergraduate work was completed at the prestigious Johns Hopkins University School for International Studies in Bologna, Italy where he participated in graduate level courses. He went on to receive his Juris Doctor degree from Stetson University College of Law in St. Petersburg.

The practice of Personal Injury Law has been Steve’s passion and pursuit for more than three decades. He is currently very actively involved in handling cases and seeking justice on behalf of those who have suffered injury and perhaps even lost a loved one due to an accident that was not their fault or because of a faulty product or practice that has caused them harm.
Steve Ruth became Board Certified as a specialist in Civil Trial Law on June 1st 1987 and June 1st 1992.